Pawhuska, OK – Olivia Gray, Director of the Osage Nation Family Violence Prevention Department, is one of only a small handful of Native women to speak at a hearing being held at the state capital in Oklahoma City on the subject of Missing and Murdered Indigenous Women.

Gray states that,“Four of us that provide services and work these cases have been asked to speak to lay the foundation, and five family members of missing and murdered Indigenous relatives from Oklahoma will also be speaking to elected representatives of the state’s government as well as a full house of Native women who are planning on attending.”

The event was organized by Representative Mickey Dollens after a Native American constituent informed him of her missing cousin. Representative Dollens has also been communicating with Native American Community Organizer Ashley Nicole McCray to get more information regarding the issue that until approached by someone from his district, he was largely unaware of. To Representative Dollens’ credit, he was responsive to his constituent and began to not only learn about the issue but start planning some solutions.

Ms. Gray was approached by a woman from the Pawnee Nation and told that she had been nominated to serve on the task force. Shortly after that, she learned that at least four others had also nominated her to serve including the leader of Black Lives Matter for the state of Oklahoma, and members of the Native Alliance Against Violence which is the state’s tribal coalition for violence against women through the Office of Violence Against Women.

Gray was surprised by the show of support from so many women that she admires. “I think I tend to forget when I’m working in Pawhuska in that little, old building with the paneling on the walls that our department is doing such good work that we are being recognized on a state and national level. It is definitely a compliment and a product of a lot of hard work and caring on the part of myself and my staff”.

The event will be held on November 19, 2019, at the capital in room 432A. Ms. Gray invites all interested Osages to please attend. 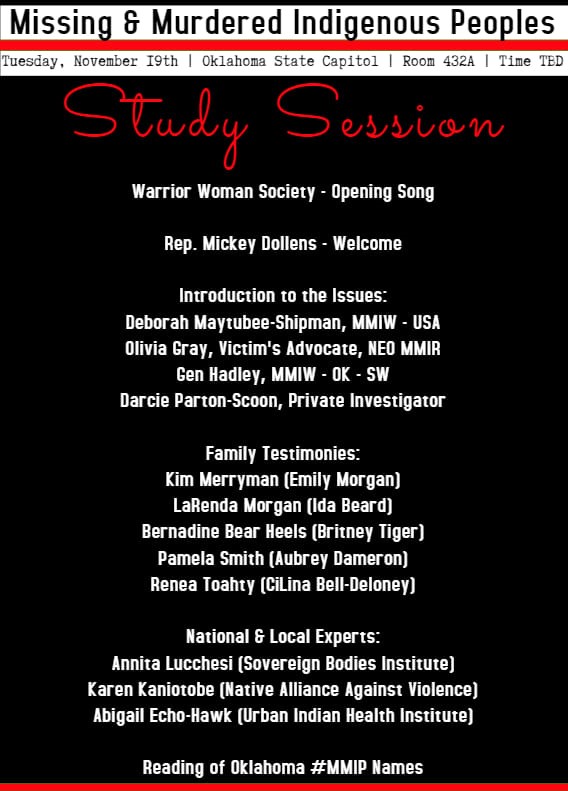