Images skillfully captured by acclaimed Osage artists, and mother and daughter team, will capture your heart

From Strategic Planning and Self Governance and Osage Nation Communications 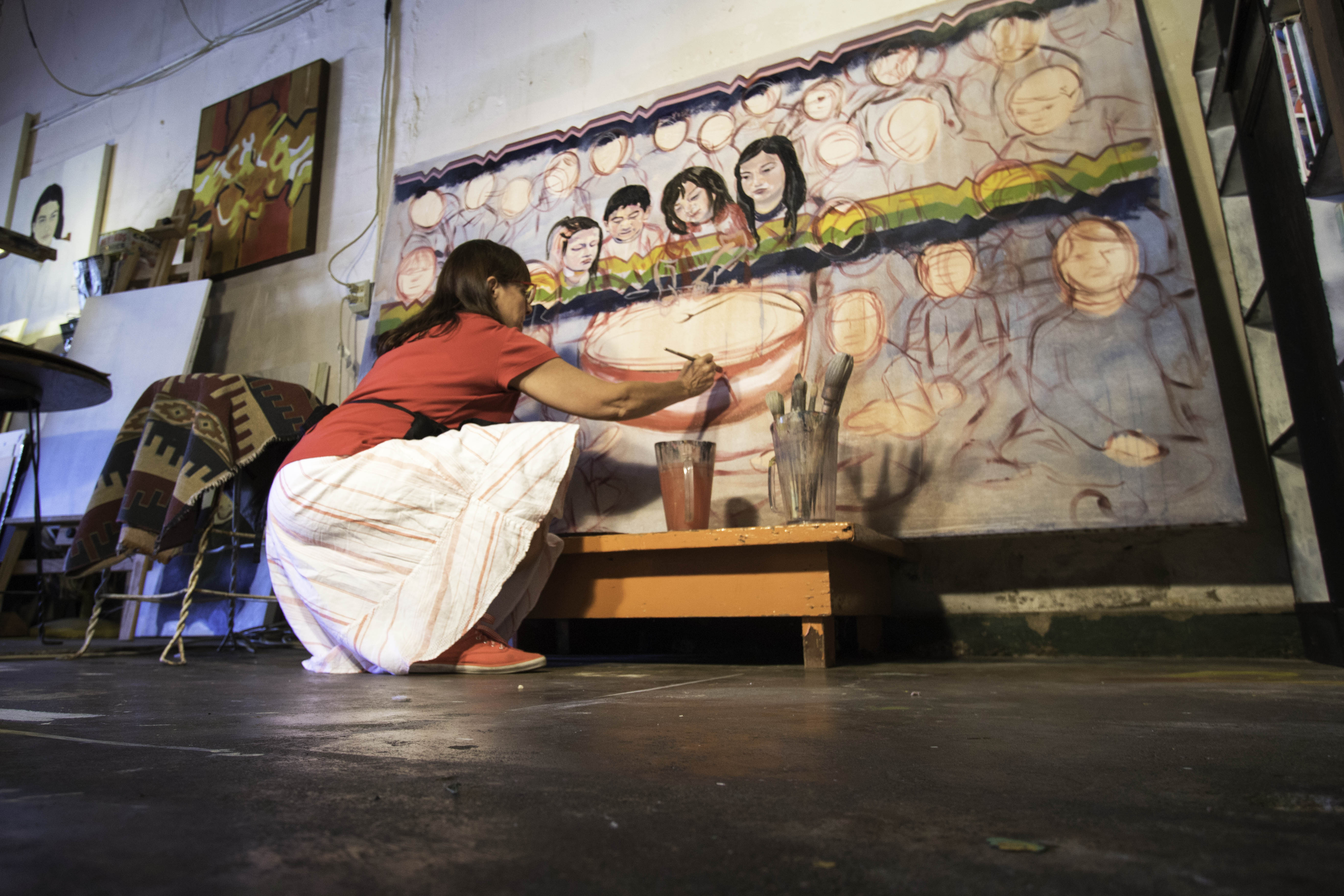 Fairfax, Okla., (Friday, June 9, 2017)--Wendy Ponca at her studio working on the mural for the Osage Nation language immersion school, the last mural in a series of five to recognize the significance of the resurgance of the Osage language.

“We know we are a part of history with this project and we have been honored and humbled by the responsibility and experience,” said Alex about the commissioned art for the schools.

“I want the Osage language to go on forever,” is the quote by Frances Oberly Holding that inspired Wendy’s illustrations for the murals. Holding was a fluent speaker and language teacher. The quote motivated the mother daughter team to portray the children who are learning the Osage language at these schools.

Daposka Ahnkodapee, Our School
The WahZhaZhe language immersion school mural portrays children in the school singing around a drum symbolizing the continuation of the Osage language and culture for future generations. As well, the artists incorporated the Osage ribbon-work patterns and the Osage orthography in the background of each painting.

Melvina Prather, Director of all four WELA sites, said, “I am overwhelmed by the work that was done in such a short timeframe. These murals signify yesterday, today and tomorrow. They show our language, our culture and our traditions. There is so much represented in each mural that a casual glance can’t comprehend.” Prather along with many others stood in awe as the artist Wendy Ponca and her husband hung the first large canvas in the entry of the new WELA facility in Fairfax.

“These murals captured my heart the minute I saw them. They are truly a gift from Wendy and Alex and a testimony to their talents and dedication to our Osage language. This mother and daughter team spent countless hours to create these historical pieces. Many Osage families will treasure them for many years to come,” Deb Atterberry, Osage Nation Strategic Planning and Self Governance Analyst. Atterberry has provided oversight for a TransCanada grant that made the murals possible.

The Osage language is now taught at all five Osage Nation schools to children ages six weeks to five years, year round.

WELA Mission
Our mission is to create a caring and nurturing learning environment which will develop the whole child: socially, emotionally, cognitively, and physically; and to encourage our children to become self-confident, enthusiastic lifelong learners.