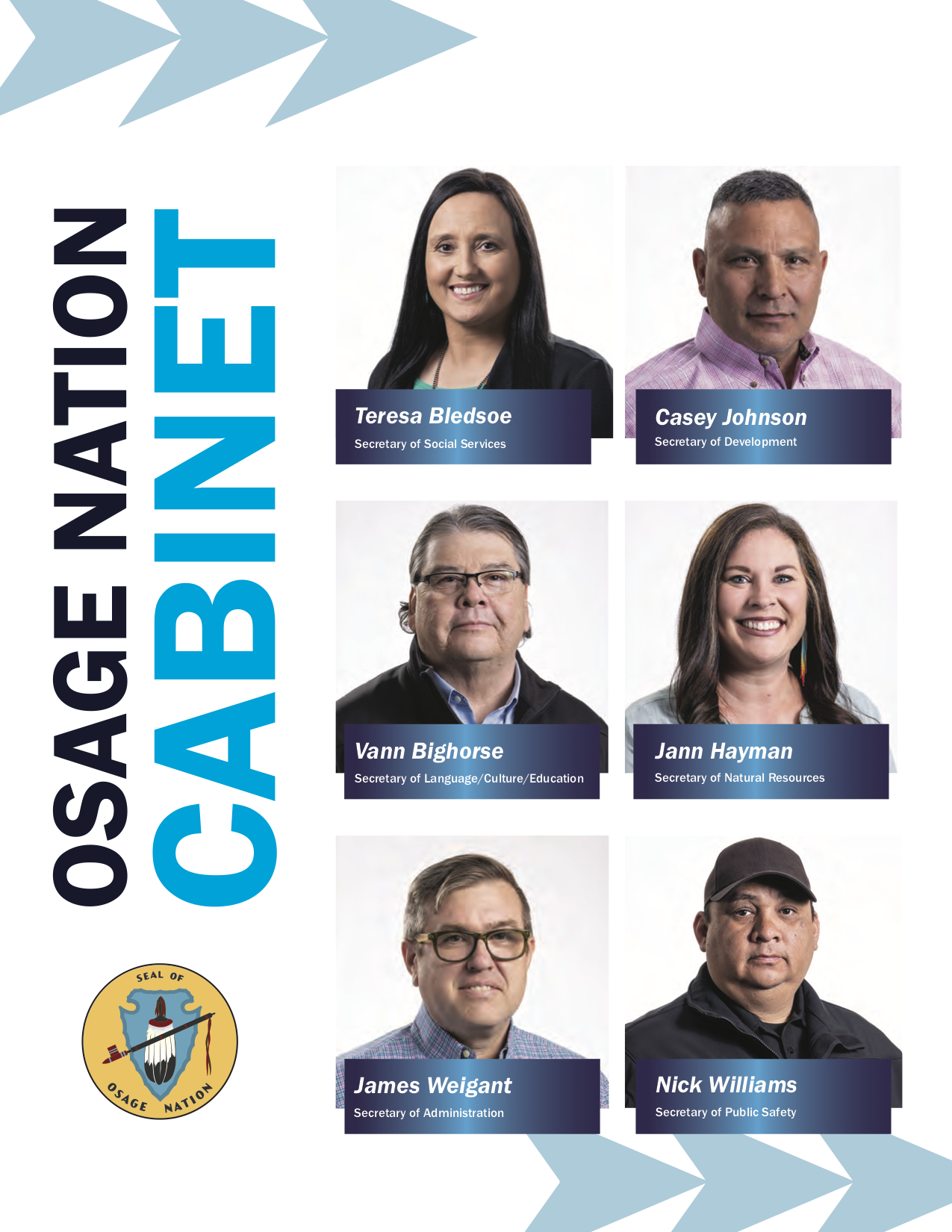 OSAGE RESERVATION, OKLA. (May 6, 2022) – Chief Standing Bear announces six Osage Nation Cabinet Secretaries. The Cabinet Secretaries counsel the Chief on various matters related to their respective offices. The Cabinet became effective on April 26, 2022, through Executive Order 22-01 to administer the ever-growing needs of the Osage Nation. Over the past eight years, the Osage Nation population has increased from 17,648 to 24,292 (as of 5/3/22) tribal citizens and services have greatly expanded.

“Osage Nation has grown substantially over the past eight years and we must make changes to accommodate the increase in our population and services we provide,” said Chief Standing Bear. “Each one of these secretaries has incredible knowledge and experience to continue supporting the needs of our thriving Nation.”

Vann Bighorse is a member of the Osage and Cherokee Nation of Oklahoma. His Osage name is 𐓷𐓘𐓤𐓘͘𐓰𐓘 𐓪𐓤𐓣𐓟. He belongs to the 𐓲𐓣𐓻𐓪 𐓷𐓘𐓯𐓰𐓘𐓤𐓟 Clan and comes from 𐓷𐓘𐓸𐓪𐓤𐓪𐓧𐓣͘, also referred to as the “Pawhuska” District. He currently resides in Ponca City, Oklahoma.

Vann started as a student of the Osage language in 2003 at Wakon Iron Hall in Pawhuska, along with four other students, under the guidance of respected tribal elder and Master Language Teacher Dr. Mongrain Lookout. From there he continued his work and dedication to the revitalization of the Osage Language and in 2020, he received his Master’s Degree in Educational Leadership from Kansas State University.

Vann works alongside the Language Department’s teachers and staff on many linguistic research and development projects, collaborating frequently with the Osage Nation Cultural Center and other Osage Nation departments and members on the creation of podcasts, apps, artistic designs, and more that serve to expand access and bring awareness to the Osage language and its orthography.

Vann enjoys leading the mission of revitalizing and sustaining the Osage language and culture, one of Chief Standing Bear’s main priorities and goals.

Teresa Bledsoe is the new Secretary of Social Services. She is from the Grayhorse/PahSueLee (𐓬𐓘𐓮𐓶𐓧𐓣͘) District and of the Eagle clan. Bledsoe grew up in the Ralston area and currently resides in Fairfax with her husband and their children. With a Bachelor’s Degree in Physical Education and a Master’s in Education Administration, Bledsoe has led the Osage Nation Child Care & Development for almost four years. Before that, she was an educator and Indian Education Director for Woodland Public Schools. Bledsoe is an at-large member of the Osage Tribal Education Committee Board and belongs to multiple professional organizations including the National Association for the Education of the Young Children, the Oklahoma Association for the Education of Young Children, and the National Indian Child Care Association. Certifications include an Oklahoma State Department of Education Teaching Certificate, Six Sigma Global Institute/Baldridge Foundation Project Management Certification (2021), and the Schnake Turnbo and Frank Leadership and Reputation Academy (2019).

Jann Hayman is a native of Skiatook and a citizen of the Osage Nation. She began working with the Osage Nation Department of Natural Resources in 2006 as a Natural Resource Specialist and then was promoted to Director in 2012. During her time with the Osage Nation, she has worked with a multitude of federal and state agencies to implement wildlife, oil and gas, and other environmental and natural resources programs. Recently, Jann has worked extensively on food sovereignty initiatives for the Osage Nation, including the development of the Harvest Land and Butcher House Meats facilities. Jann received a Bachelor of Science in Agricultural Education with a minor in Animal Science and a Masters of Agriculture in Agriculture, both from Oklahoma State University.  More recently, she also obtained a Doctor of Education from Kansas State University, where her research interests are related to the development and implementation of Native nation agriculture and agricultural education programs.

Christian Casey Johnson retired as a First Sergeant after 23-years of service with the United States Army Infantry, including two combat tours in Iraq receiving a Bronze Star and Purple Heart. He is a member of the Grayhorse/PahSueLee (𐓬𐓘𐓮𐓶𐓧𐓣͘) District and of the Ponca Peacemaker Clan. His Osage name is 𐓸𐓶𐓵𐓘 𐓩𐓪͘𐓬𐓘𐓺𐓣 (Eagle Not Afraid). He is a graduate of the University of Central Oklahoma with a BS degree in Industrial Safety and holds 30 Master’s Degree hours in Administrative Leadership at the University of Oklahoma. He served as the Director of Operations at the Osage Nation for nearly eight years before being promoted to the Secretary of Development.

Over the past six years, James Weigant has served the Osage Nation as the Deputy Director of Operations, Housing Director, and COVID Task Force Coordinator. James was born and raised in Pawhuska. His Osage lineage comes from his Fronkier side of the family. James’ maternal grandfather, Frantz Fronkier, also worked for the Osage Nation in the 1950s in the Minerals Department.

James holds a Master of Public Administration from the University of Oklahoma. Before joining the Osage Nation, he worked for the Oklahoma Municipal League, the Tulsa City Council, and Young Oil Tools where he ran the Remco Division. James and his wife Katie live in Bartlesville with their two teenage sons. In his spare time, he enjoys writing for stamp collecting publications, working on his old car and spending time with family at Bluestem Lake.

Nicholas Joe Williams, aka Nick, is the son of John W. and Frances A. Williams. He is from the Grayhorse/PahSueLee (𐓬𐓘𐓮𐓶𐓧𐓣͘) district and resides in Fairfax with his family (three in Houston). Nick is currently the Whipman/WahNahZhe (𐓷𐓘𐓩𐓘𐓯𐓣) for the Grayhorse/PahSueLee (𐓬𐓘𐓮𐓶𐓧𐓣͘) District and is of the Ponca Peacemaker clan. Nick is a Veteran of the U.S. Air Force and has been the Chief of Police for the Osage Nation Police Department since 2011.

Nick used his education and training from the service and worked for a Native-owned company named Chugach, an Alaskan 8A company based in Anchorage, AK. In addition, he became an Environmental State Manager for the State of New Mexico and is acknowledged as the second-highest scorer in the State for this title. Nick moved home to the Osage Nation in 2005 where he started as a Security Officer for the Osage Casinos. Since then he entered the field of Law Enforcement and attended the Oklahoma Council on Law Enforcement Education and Training (CLEET). During this time, he accumulated the amount of classroom training and years of service needed to obtain an Intermediate Certification from the Council on Law Enforcement Education and Training.

In June 2011, Nick was asked and accepted the position of Whipman/WahNahZhe (𐓷𐓘𐓩𐓘𐓯𐓣) for the Grayhorse/PahSueLee district (𐓬𐓘𐓮𐓶𐓧𐓣͘) under Drum Keeper Jacob Lux. Although Nick has sat on several committees for the Grayhorse/PahSueLee (𐓬𐓘𐓮𐓶𐓧𐓣͘) District before taking this position of Whipman/WahNahZhe (𐓷𐓘𐓩𐓘𐓯𐓣), he has never been so honored and happy to be around his Osage family and culture.