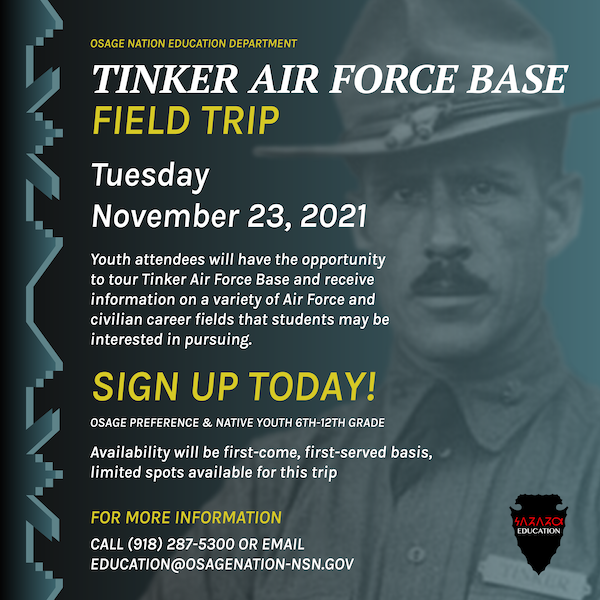 OSAGE RESERVATION, OKLA. (October 7, 2021) – Osage Nation is sponsoring a field trip to Tinker Air Force Base on Tuesday, November 23, 2021. The trip is for area Native American youth 6th through 12th grades. Osage preference will be given. Osage Nation Education and Financial Assistance Departments are coordinating the trip with Tinker Air Force personnel to provide students an opportunity to tour the base and explore both military and civilian careers. This tour is the first step in a larger collaboration between Osage Nation Education and Financial Assistance Departments focused on providing career-minded opportunities to youth

“Tinker Air Force Base offers an incredible variety of cutting edge career fields,” said Osage Chief Standing Bear. “This is an exciting opportunity to expose our youth to opportunities available and inspire them to continue working hard for the future.”

Tinker Air Force Base is a major United States Air Force base located in Oklahoma County, Okla. The base was named in honor of Major General Clarence L. Tinker, an Osage from Pawhuska, Okla., who lost his life while leading a flight of LB-30 "Liberators" on a long-range strike against Japanese forces on Wake Island during the early months of World War II. Today, with more than 26,000 military and civilian employees, Tinker is the largest single-site employer in Oklahoma. Not only is total support of America's defense systems a priority, but protecting and enhancing the environment is a top concern as well. Through the use of aggressive and innovative technologies, Tinker has become a national leader in pollution prevention, earning multiple Department of Defense awards for environmental stewardship. Tinker is also home to eight major Department of Defense, Air Force and Navy activities with critical national defense missions. Find out more at www.tinker.af.mil.

Those interested in attending the field trip or finding out more information can call (918) 287-5300 or email @email. Availability is first-come, first-serve basis with limited spots available.