You can enroll online on the Cultural Class Enrollment page. 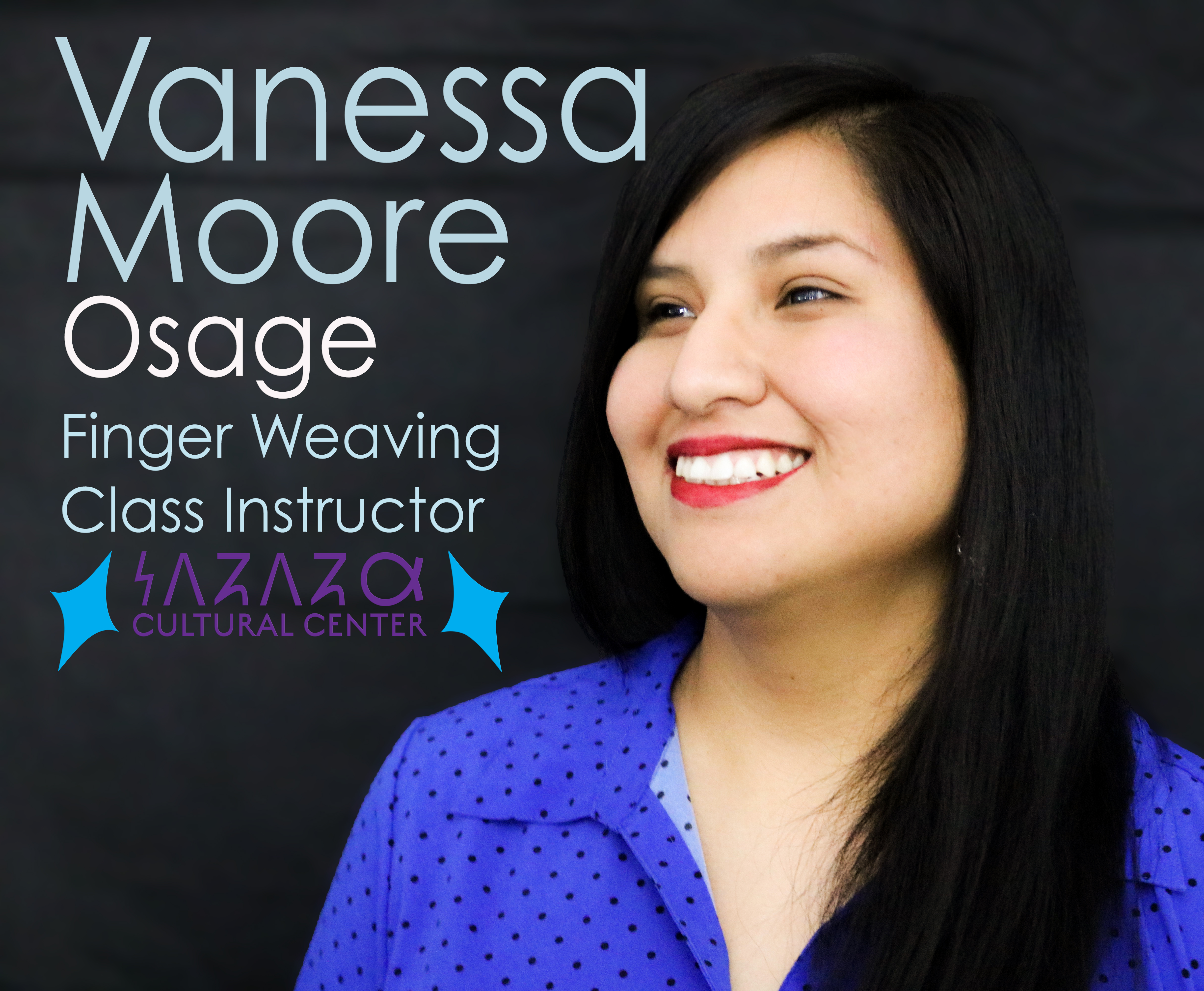 Hawé, my name is Vanessa Rose Moore. I am from the Osage, Pawnee, and Blackfeet nations. I grew up in Hominy, Okla. I am the daughter of Michael Moore, from Pawnee, Okla., and Hazel Moore from Hominy. My paternal grandparents are Wilson and Virginia Moore of Pawnee and my maternal grandparents are Edward Pratt and Freda Kipp Bigheart of Hominy. I am from the Zonzoli District. I learned how to weave from Anita Lookout West and Addie Hudgins by taking classes hosted by the Cultural Center beginning when I was in junior high and continuing through my high school years. I continued to finger weave on my own through college and have made many wonderful items for men, women and children.

In December 2017, I graduated from Northeastern State University in Tahlequah, Okla., where I obtained my Bachelor’s degree in Art (Studio Art 2D Emphasis) with a minor in Psychology. Soon after graduation I started an internship at the Gilcrease Museum in Tulsa, Okla. I was only there a short time when I was recruited by the Osage Nation Office of the Chiefs to begin working as the Assistant Graphic Designer for the Osage Nation.

“I am very humbled to have the honor of teaching finger weaving on behalf of the WahZhaZhe Cultural Center. I hope to see many new faces and lots of returning students to support the continuance of this beautiful Osage tradition.” –Vanessa Moore 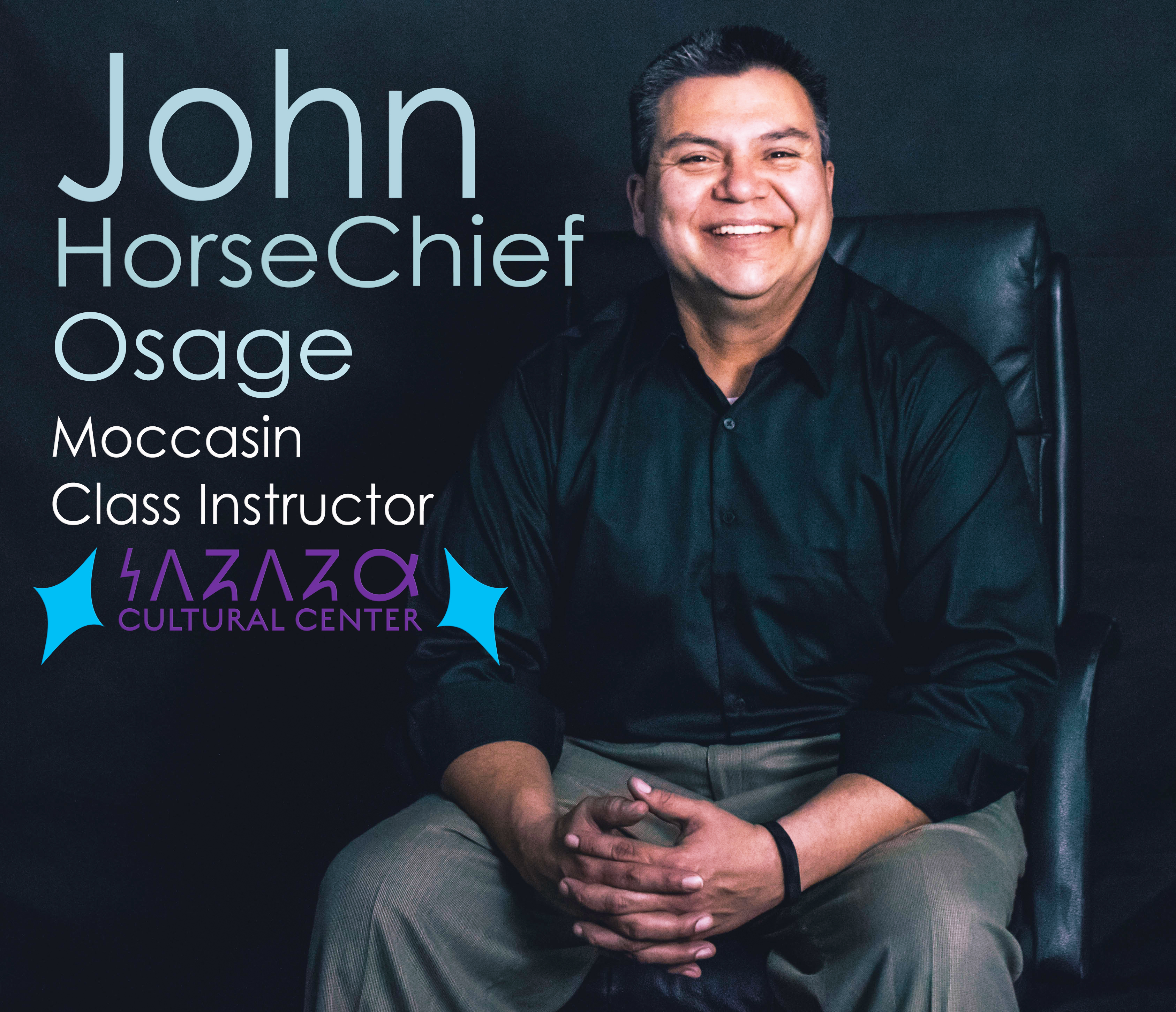 Hawé, my name is John Levi HorseChief (Osage, Pawnee, Blackfeet, Pottawatomi). I teach moccasin making and I am the audio/visual technician at the WahZhaZhe Cultural Center in Pawhuska, Okla. I am named after John Levi the professional football player for the Hominy Indians, whom my great-grandfather George Kipp played alongside when the Hominy Indians beat the New York Giants in 1927 for the World Championship. I am the proud father of six children, three boys and three girls. My father is Alfred Horsechief Jr. (Osage) of Pawnee, Okla., and my mother is Deborah Yates (Osage) of Nelagony, Okla. I pursued my higher education in Albuquerque, NM, at the Southwestern Indian Polytechnic Institute (SIPI) and obtained an A.A.S. in Network Management in addition to becoming a Cisco Certified Network Associate (CCNA).

The acclaimed Osage artist, Joe Don Brave taught me how to make moccasins. More importantly, he showed me how to encourage a relaxed, fun, artistic environment for my classrooms. I particularly enjoy working with elders. My co-workers and myself teach moccasin making during the spring and fall in Pawhuska, Hominy, and Fairfax. We also occasionally do moccasin-making workshops at other locations across the U.S. when invited.

When I wear my moccasins I feel connected to the earth and my ancestors. If you are interested in learning how to make or repair moccasins, don’t hesitate and sign-up for one of the classes offered by the Wahzhazhe Cultural Center.